The BC Centre for Disease Control issued the following news release on November 15, 2016:

BC reduces antibiotic use, but still more to be done

The rate of antibiotic prescribing in British Columbia fell 15 per cent between 2005 and 2014, according to a new analysis conducted by the BC Centre for Disease Control.

“We’re seeing some good progress when it comes to reducing unnecessary antibiotic prescription in the community, which not only saves the health care system money, but more importantly, helps mitigate the real threat posed by antibiotic resistant organisms,” said Dr. Mark Tyndall, executive medical director with the BCCDC. “But we shouldn’t let that lull us into a false sense of security. There is still much work to be done and this remains a serious issue.” 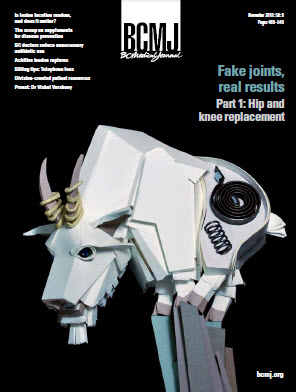 The analysis of BCPharmaNet claims, conducted by the BCCDC’s Do Bugs Need Drugs (DBND) program, shows that between 2005 and 2014, antibiotic prescribing fell from 1.79 to 1.53 daily prescriptions per thousand BC residents. This can be explained by steep declines in prescribing for children and for respiratory infections, the original targets of the DBND program.

“Antibiotic resistance is one of the greatest threats to global human health,” said Dr. David Patrick, medical lead for antimicrobial resistance and DBND at the BCCDC. “Programs like Do Bugs Need Drugs are so important to build awareness of the issue and to educate health care professionals and the public. We need to preserve the value of antibiotics for future generations.”

The DBND program has identified two key priorities for the months and years ahead. The first is to continue reducing prescriptions in long-term care facilities, where a past tendency to over-treat asymptomatic bacteriuria (bacteria in the urine) is being slowly reversed. The second is to continue working with dentists to reduce unnecessary surgical prescriptions, as well as prescriptions for non-urgent symptoms and infections.

For more, see the BCCDC’s submission in the November edition of the BC Medical Journal.

The BC Centre for Disease Control, an agency of the Provincial Health Services Authority, provides provincial and national leadership in public health through surveillance, detection, treatment, prevention and consultation services. The Centre provides both direct diagnostic and treatment services for people with diseases of public health importance and analytical and policy support to all levels of government and health authorities For more information, please visit www.bccdc.ca or follow us on Twitter @CDCofBC

The Provincial Health Services Authority (PHSA) plans, manages and evaluates selected specialty and province-wide health care services across BC, working with the five geographic health authorities to deliver province-wide solutions that improve the health of British Columbians. For more information, visit www.phsa.ca or follow us on Twitter @PHSAofBC